Happy Pentecost and Other Happenings

On Tuesday the 29th, I will head out of town for an extended period of continuing education. I will return to church on June 24th. We have some wonderful guest celebrant/preachers lined up and I hope you will all welcome them with your customary warmth. I will attempt to blog from Princeton. May God watch between me and thee while we are parted one from another.

Yrs, in Christ, Jennie
Posted by The Rev. Dr. Jennie Clarkson Olbrych at 12:10 AM No comments:

Always on a Thursday and forty days into the Easter celebration. What sense do you make of this? 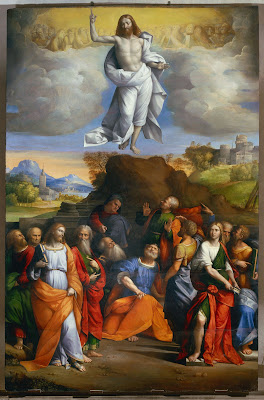 49And see, I am sending upon you what my Father promised; so stay here in the city until you have been clothed with power from on high.’ 50 Then he led them out as far as Bethany, and, lifting up his hands, he blessed them. 51While he was blessing them, he withdrew from them and was carried up into heaven. 52And they worshipped him, and returned to Jerusalem with great joy; 53and they were continually in the temple blessing God.

Posted by The Rev. Dr. Jennie Clarkson Olbrych at 10:56 AM No comments:

In addition to Mother's Day, this coming Sunday, the Sixth Sunday of Easter, is also known as Rogation Sunday. The name comes from the gospel for the day, which includes the words "Whatever you ask the Father in my name, he will give to you". Rogation comes from the Latin word (rogare, I think) for ' to ask'. Traditionally, Rogation was when the priest, in full vestments and accompanied by all the villagers, went around the boundaries of each parish. Later this procession became known as the parish 'perambulation', or 'beating the bounds.' There were two reasons for walking the bounds. One was to learn where it was in the days when there were no maps. The other was to check that no one had moved any of the marker stones and therefore laid claim to your land.

These days, the purpose of Rogation Sunday (and the Monday, Tuesday, and Wednesday of the coming week) is to give thanks to God for the blessings of land, produce, livestock, and, in our case, the bounty of the seas.

George Herbert, poet and priest, gave the following good reasons to beat the bounds: 1) a blessing of God for the fruits of the field; 2) Justice in the preservation of the bounds; 3) Charitie, in living, walking and neighbourliy accompanying one another, with reconciling of differences at that time, if they be any; 4) Mercie, in relieving the poor by a liberal distribution of largess which at that time is or oght be made.


Posted by The Rev. Dr. Jennie Clarkson Olbrych at 12:03 PM No comments:

One of the great gifts of our Anglican tradition is the keeping of a church year calendar. We mark seasons, commemorate saints days, feasts, fasts, and Christian brothers and sisters whose lives have been exemplary. There are two significant commemorations this week. On Tuesday, May 8th, we remember Dame Julian of (1342-1417) and, on May 9th, St. Gregory of Nazianzus (329-389) . Below follows a bit of information about each of them.

The Lady Julian (or Juliana) was born about 1342, and when she was thirty years old, she became gravely ill and was expected to die. Then, on the seventh day, the medical crisis passed, and she had a series of fifteen visions, or "showings," in which she was led to contemplate the Passion of Christ. These brought her great peace and joy. She became an anchoress, living in a small hut near to the church in , where she devoted the rest of her life to prayer and contemplation of the meaning of her visions. The results of her meditations she wrote in a book called Revelations of Divine Love, available in modern English in a Penguin Paperback edition. During her lifetime, she became known as a counselor, whose advice combined spiritual insight with common sense, and many persons came to speak with her. Since her death, many more have found help in her writings.The precise date of her death is uncertain.Her book is a tender meditation on God's eternal and all-embracing love, as expressed to us in the Passion of Christ.She describes seeing God holding a tiny thing in his hand, like a small brown nut, which seemed so fragile and insignificant that she wondered why it did not crumble before her eyes. She understood that the thing was the entire created universe, which is as nothing compared to its Creator, and she was told, "God made it, God loves it, God keeps it."She was concerned that sometimes when we are faced wiith a difficult moral decision, it seems that no matter which way we decide, we will have acted from motives that are less then completely pure, so that neither decision is defensible. She finally wrote: "It is enough to be sure of the deed. Our courteous Lord will deign to redeem the motive." Source: James Kiefer writing here. For additional information about Dame Julian, visit here and here. 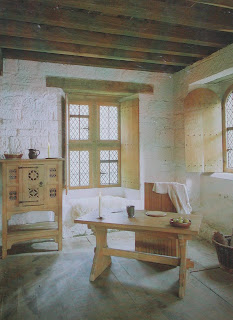 Although the room where Julian lived and received visitors was destroyed during WW II,
it has been faithfully recreated.

The Second Commemoration of the Week (May 9) is Saint Gregory of Nazianzus
who, with Saints Athanasius, Basil, and John Chrysostom, is a Father of the Church and one of the four Eastern Doctors of the Church. He is known especially for his contributions to the theological definition of the Trinity and the nature of Christ. He, Basil, and Gregory of Nyssa are called the Cappadocian Fathers. Brought up in the Cappadocian town of Nazianzus (present-day Bekar, Turkey), where his father was bishop, Gregory as a young man was reluctant to take a position of responsibility in the church, retiring instead to a monastic community started by Basil in Pontus. He explained this action in his Defense of the Flight to Pontus, which became the basis for works on the priesthood by Saint John Chrysostom and Pope Gregory I. Gregory was consecrated a bishop in 371 but did not become actively involved in ecclesiastical affairs until he assumed leadership (379) of the orthodox community in Constantinople, at a time when the city was divided by controversy between rival Christian groups. He played a leading role at the first Council of Constantinople (381), which continued the definition of Christian teaching begun at the councils of , but opposition at the council to Gregory's claim to the bishopric of made him decide to return to Nazianzus. In 384 he again retired to monastic life, and died a few years later.

More about Gregory can be learned at here and here.

"To us there is One God, for the Godhead is One, and all that proceedeth from Him is referred to One, though we believe in Three Persons. For one is not more and another less God; nor is One before and another after; nor are They divided in will or parted in power; nor can you find here any of the qualities of divisible things; but the Godhead is, to speak concisely, undivided in separate Persons; and there is one mingling of Light, as it were of three suns joined to each other. When then we look at the Godhead, or the First Cause, or the Monarchia, that which we conceive is One; but when we look at the Persons in Whom the Godhead dwells, and at Those Who timelessly and with equal glory have their Being from the First Cause--there are Three Whom we worship."

Posted by The Rev. Dr. Jennie Clarkson Olbrych at 5:40 PM No comments:

Hope everyone who is able will join us in McClellanville this coming Saturday for the annual Blessing of the Fleet and the Shrimp Festival. Here is the link to more info. My goodness! What a fun time this is! Come and bring the family!
Posted by The Rev. Dr. Jennie Clarkson Olbrych at 12:39 PM No comments:

Readings for Sunday, Easter 5, May 6th.

A website that I visit frequently is known as "The Text this Week". This site helpfully publishes links to the upcoming Sunday readings, various commentaries and even sermons. The link to the texts for this coming week can be found here. Check it out!

19After this I heard what seemed to be the loud voice of a great multitude in heaven, saying, “Hallelujah! Salvation and glory and power to our God, 4And the twenty-four elders and the four living creatures fell down and worshiped God who is seated on the throne, saying, “Amen. Hallelujah!” 5And from the throne came a voice saying, “Praise our God, all you his servants, and all who fear him, small and great.” 6Then I heard what seemed to be the voice of a great multitude, like the sound of many waters and like the sound of mighty thunderpeals, crying out, “Hallelujah! For the Lord our God the Almighty reigns. 7Let us rejoice and exult and give him the glory, for the marriage of the Lamb has come, and his bride has made herself ready; 8to her it has been granted to be clothed with fine linen, bright and pure”— for the fine linen is the righteous deeds of the saints. 9And the angel said to me, “Write this: Blessed are those who are invited to the marriage supper of the Lamb.” And he said to me, “These are true words of God.”

The marriage supper of the Lamb sounds wonderful, doesn't it? And, the good news is that you are invited, as is all of creation. One's imagination could run pretty wild given the rich variety of wedding celebrations possible. I don't think the picture below is from a wedding feast, but, hey, it might look like this! Here is a giant Ukrainian pysanka (Easter egg) built in 1975 in Vegreville, Canada. 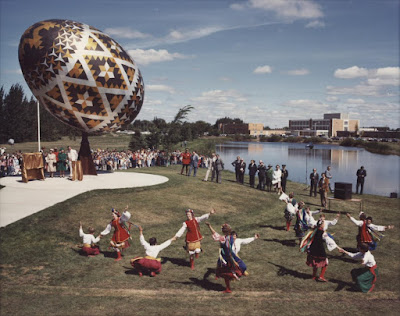 Posted by The Rev. Dr. Jennie Clarkson Olbrych at 12:00 PM No comments: 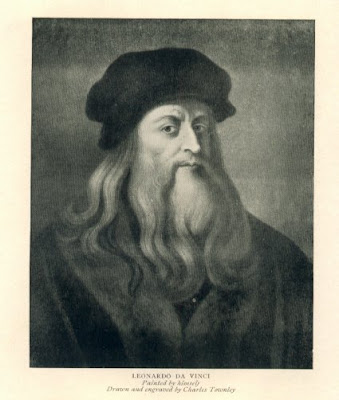 Don't look. He's not in our liturgical calendar, but maybe should be. Leonardo da Vinci died on this date in 1519. Edward Hays tells us, he was... "A true genius in many and varied fields. When commissioned to paint a portrait of the wife of Francesco del Giocondo, he found it very difficult to make her smile. Da Vinci even resorted to hiring people to play, sing, and jest while he painted her. Today, Mona Lisa's smile is renowned. A good day to let the grace of the Easter season make your smile unforgettable."
Posted by The Rev. Dr. Jennie Clarkson Olbrych at 11:51 AM No comments: