Dear Friends, It is my prayer and hope that during this Thanksgiving time that you will stop to give thanks for our lives and for the many blessings - large and small- with which we are surrounded. Consider, too, being converted to a live lived in thankfulness every single day - for the beauty of nature, for the blessing of family and friends, and for the deepening flow of life's experience. Below is a lovely meditation by Brother David Steindl-Rast. It is entitled "A Good Day." Have a look and be blessed.
Posted by The Rev. Dr. Jennie Clarkson Olbrych at 9:40 AM No comments: 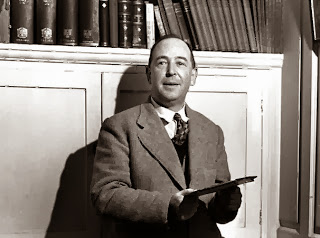 This past Friday, we marked the commemoration of the life of C.S. Lewis,(1898-1963)  novelist, poet, academic, medievalist, literary critic, essayist, lay theologian, and Christian apologist. Here is a quote of his that speaks to hope -- spes!

Hope is one of the Theological virtues. This means that a continual looking forward to the eternal world is not (as some modern people think) a form of escapism or wishful thinking, but one of the things a Christian is meant to do. It does not mean that we are to leave the present world as it is. If you read history you will find that the Christians who did most for the present world were just those who thought most of the next. The Apostles themselves, who set on foot the conversion of the Roman Empire, the great men who built up the Middle Ages, the English Evangelicals who abolished the Slave Trade, all left their mark on Earth, precisely because their minds were occupied with Heaven. It is since Christians have largely ceased to think of the other world that they have become so ineffective in this. Aim at Heaven and you will get earth "thrown in": aim at earth and you will get neither.

Posted by The Rev. Dr. Jennie Clarkson Olbrych at 3:06 PM No comments: 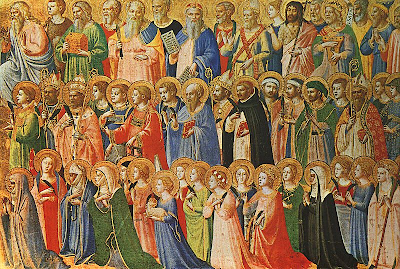 All Saints by Fra Angelico
A Prayer for All Saints (BCP)

Almighty and everlasting God, we give you most high praise and Hearty thanks for the wonderful grace and virtue declared in all your saints, who have been the chosen vessels of your grace, and the lights of the world in their times: for Abraham, the father of believers, and Sarah his wife; for Moses the lawgiver, and Aaron the priest; for Miriam and Joshua, Deborah and Gideon, and Samuel with Hannah his mother, and for all the holy patriarchs; for Isaiah and all the prophets; for the Blessed Virgin Mary, the mother of Jesus Christ our Lord and God; for Peter and Paul and all the apostles; for Mary and Martha, and Mary Magdalene; for Stephen, the first martyr, and for all the martyrs; and for all your other righteous servants, known to us and unknown; and we beseech you that, rejoicing in their fellowship, encouraged by their examples, and aided by their prayers, we also may run with steadfastness the race that is set before us, and finish our course in faith; and that at the day of the general resurrection, we, with all those who are of the mystical body of your Son, may be set on his right hand, and hear his most joyful voice: "Come, you blessed of my Father, inherit the kingdom prepared for you from the foundation of the world." Grant this, O Father, for the sake of your Son Jesus Christ, our only Mediator and Advocate.


The most well-known hymn associated with All Saints Day is For All the Saints -- here are two performances with the words below..


1. For all the saints, who from their labours rest,


Who Thee by faith before the world confessed,

2. Thou wast their Rock, their Fortress and their Might;


Thou, Lord, their Captain in the well fought fight;


Thou, in the darkness drear, their one true Light.

3. O may Thy soldiers, faithful, true and bold,


Fight as the saints who nobly fought of old,


And win with them the victor’s crown of gold.


We feebly struggle, they in glory shine;


Yet all are one in Thee, for all are Thine.

5. And when the strife is fierce, the warfare long,


Steals on the ear the distant triumph song,


And hearts are brave, again, and arms are strong.

6. The golden evening brightens in the west;


Sweet is the calm of paradise the blessed.

7. But lo! there breaks a yet more glorious day;


The King of glory passes on His way.


Through gates of pearl streams in the countless host,


And singing to Father, Son and Holy Ghost:

Posted by The Rev. Dr. Jennie Clarkson Olbrych at 10:14 AM No comments: