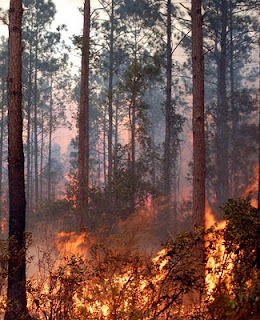 Last week a good sized fire named "The Windy Fire"  came calling in the vicinity of Brick Church, Old Georgetown Rd, Rutledge Road and the South Santee area.  We are thankful to God that there were no injuries or loss of life.  The fire consumed about 2,600 acres of timber by the time it was done.  It started on Wednesday, the 23rd and  I noted one or two spots still smouldering when I rode out there on Sunday.  It was considered 95% contained by late Friday.
What an anxious time.  I sat by the radio scanner listening to the various firetrucks and divisions all working together in a pretty wonderfully coordinated way.  Ben Chapman told me that there were two fire truck stationed at Brick Church and apparently they were staged all around to protect some our other historic properties - Hampton Plantation, Harrietta,  the Wedge, and Fairfield on the South Santee side.
By Sunday, we realized just how close the fire had come to Brick Church and to the Wambaw tract.  The fire burned right up to the northeast corner of the Wambaw tract.  Firefighters and the forestry folks are convinced that it did not go further because of the controlled burning we've been doing (well, the Nature Conservancy) over the past two years.  Also, the firefighters were using back burning to block areas as well as firebreaks.  Fighting fire with fire is a common expression but I understand it better now.  The controlled burning took out what would have been fuel for a big fire and cleared out the undergrowth so the long leaf pines could stretch out and have room to thrive.  Some of the area (the Peachtree tract) is absolutely burnt to cinders and is so damaged that it will not be able to come back.  A good bit of the rest of the forest looks as if it will be able to make a comeback - although it looks pretty fire darkened now.   I suspect there are more than a few sermons in this all too real happening, but the thing that strikes me right away is the lesson in controlled burning.  Perhaps, just perhaps, God can use the difficult times in our lives as a kind of controlled burning -- the undergrowth burns up so that our spirits can have room to grow and flourish.  I don't know.  It is certainly difficult to think this way when one is in the middle of adversity and it is only in retrospect that we can see.  I like something St. Paul had to say about suffering  (Romans 5). He writes, "We boast in our suffering..."  Eugene Peterson puts it this way  "We continue to shout our praise even when we are hemmed in with trouble." (The Message)...the NRSV continues...knowing that suffering produces endurance, and endurance produces character, and character produces hope , and hope does not disappoint us..."..So, Paul says when the controlled burning, when the back burning starts, praise God for what it will bring.    All in all , I think I'd rather go through a fire having had controlled burning  overseen by the Almighty ahead of time, so that when the big and really dangerous one shows up, I have some degree of protection.  I'd like for you to have that too.   Blessings,  Jennie

Photo by Tom McGree
Posted by The Rev. Dr. Jennie Clarkson Olbrych at 5:42 PM No comments: 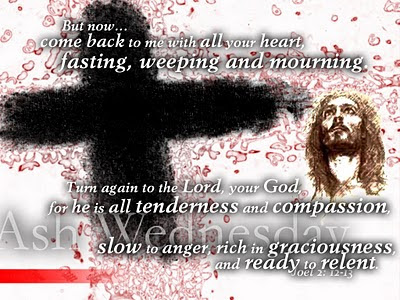 Ash Wednesday is come again.  Thank God.
The Lord says through Joel,  "Return to Me."  St. Paul says, "I BEG you on behalf of Christ, be reconciled to God."  I think he would prefer that be put in all caps. BE RECONCILED TO GOD!  In email and internet parlance, all caps is the equivalent of shouting.
I want to ask you just what does one DO with all of this kind of talk?  What if I (or you or we) were not even aware in the least that we have need of such thing?  Well, then, that might be a problem  and which is precisely why Joel is talking about blowing trumpets (wake up call) and why the Ash Wednesday Collect says, drawing from Psalm 51, "Create and make in us new and contrite hearts."  It is just when we start to think - "I don't need this stuff : God and I are just fine" that we are in the most difficulty.  We are in quicksand and don't even realize that we have fallen.  The simple truth is just what John says - All have sinned and fallen short....When our hearts are softened toward God, we realize just how much we fall short.  I did it at 4:00 this afternoon, Lord, help me. It wasn't huge in the big scale of things, but it was one of those little stumbles that lets you know - "O wait a minute...that wasn't exactly right."  So, we do need to return and we do need to be reconciled.  If you don't have a sense of your need for this--then ask God for that new and contrite heart.  He will give it to you, and it will be as tender as the skin of a newborn baby.  And, that will be something worth having.  May God bless you this Lent.
Posted by The Rev. Dr. Jennie Clarkson Olbrych at 8:54 PM 1 comment: