The Feast Day of our Patron Saint - St. James the Apostle

...was this week - July 25th -- below is a nice write up (heavy on legend)  about St. James and includes a recipe for a well known dish - Coquille St. Jacque - developed in honor of St. James...check it out! 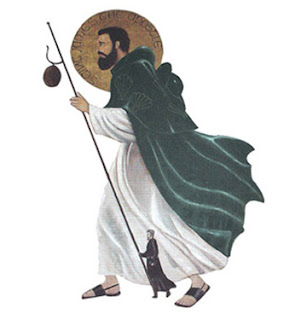 St. James was the son of Zebedee, a Galilean fisherman, and Salome, a pious woman who tended after Christ. He and his younger brother, St. John (Feast Day: December 27), were called as disciples just after Simon Peter and Andrew were called, and Peter, James and John are often mentioned together in Scripture, having been witness to the raising of Jairus's daughter, the Transfiguration, and Christ's Agony in the garden of Gethsemani.

He and his brother must have been quick to anger and zealous as they came to be called "Boanerges" ("Sons of Thunder") -- a nickname given to them by Jesus Himself. After Our Lord's Ascension, tradition says that St. James's zeal for evangelizing took him to parts of Spain for a time, as St. Paul had wanted to do (Romans 15:24), whereafter he returned to Judea for his martyrdom.

In A.D. 44, Herod Agrippa I, the grandson of Herod the Great who tried to have the infant Jesus killed, set out to do the will of the Jews by dealing harshly with local Christians. St. James was accused, and Herod then "killed James, the brother of John, with the sword." (Acts 12:1-2). Church Historian, Eusebius, tells us that St. James's accuser followed James to martyrdom when he converted after hearing the Saint's confession to Herod.

Here tradition picks up again by telling us that James's relics were translated to Spain (of course, legends grew surrounding the event, one strange and lovely one in particular apparently meant to explain why the cockleshell is St. James's emblem. It is said that when the Saint's relics were being conveyed by ship from Jerusalem and approached the coast of Portugal, a man happened to be riding his horse on the beach. The horse disobediently plunged into the sea, with its rider, making for the boat. They sank, of course, but then rose again, covered with scallop shells, and hence the cockleshell became the symbol of our hero). The relics were entombed and rather forgotten after years of Roman persecution, Vandal and Visigoth invasions, and Muslim attacks -- forgotten, that is, until an early 9th century hermit named Pelayo discovered the tomb -- some say after seeing a star marking the place -- in an area that became known as Compostela, which means "Field of Stars." The King built a cathedral to mark the location (Pelayo's Bishop, Theodomor of Iria, is also buried there, refusing to be buried in his See out of his desire to be near the Saint).

The faithful began to make pilgrimages to the site -- so much so that Compostela became the third greatest place of pilgrimage, just after Jerusalem and Rome -- and still make the pilgrimage today. After making one of the many routes, known as "the Camino," pilgrims attach cockleshells or their facsimile to their hats or clothes as "pilgrim badges."

At the time of the Muslim ("Moorish") invasions mentioned above, a particular battle took place that was to seal St. James ever more closely to Spain, where he is known as "Sant  Iago."  (Saint James) At the Battle of Clavijo in A.D. 841, the Christians had lost and were in retreat when King Ramirez of Leon had a dream in which the Apostle assured him of victory. He relayed his vision to his men, and the next morning he had his trumpeters sound the call to battle. There, on the field, the men saw St. James on a horse adorned with cockleshells, waving a banner. He led the Christians on to a clear victory, and ever since, the Spanish battle-cry has been "Santiago!"

St. James is the Patron of Spain, equestrians, blacksmiths, tanners, veterinarians. He is usually depicted in art with his symbols -- the cockleshell, pilgrim hat, sword, Sacred Scripture -- or on horeseback, usually trampling a Moor.

For more (including the recipe)  read on... 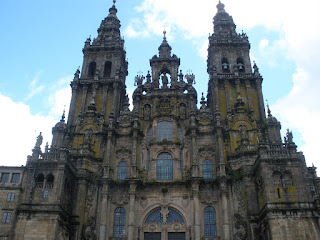 Click on image to enlarge it...
Posted by The Rev. Dr. Jennie Clarkson Olbrych at 2:44 PM No comments: