Jesus said to his disciples, "Touch me and see; for a ghost does not have flesh and bones as you see that I have." Touch communicates what is most real...here is a wonderful story about the power of touch.

Heidi and Paul Jackson's twin girls, Brielle and Kyrie, were born October 17, 1995, 12 weeks ahead of their due date. Standard hospital practice is to place preemie twins in separate incubators to reduce the risk of infection. that was done for the Jackson girls in the neonatal intensive care unit at the Medical Center of Central Massachusetts in Worcester.
Kyrie, the larger sister at two pounds, three ounces, quickly began gaining weight and calmly sleeping her newborn days away. But Brielle, who weighed only two pounds at birth, couldn't keep up with her. She had breathing and heart-rate problems. The oxygen level in her blood was low, and her weight gain was slow.
Suddenly, on November 12, Brielle went into critical condition. She began gasping for breath, and her face and stick-thin arms and legs turned bluish-gray. Her heart rate was way up, and she got hiccups, a dangerous sign that her body was under stress. Her parents watched, terrified that she might die.
Nurse Gayle Kasparian tried everything she could think of to stabilize Brielle. She suctioned her breathing passages and turned up the oxygen flow to the incubator. Still Brielle squirmed and fussed as her oxygen intake plummeted and her heart rate soared.
Then Kasparian remembered something she had heard from a colleague. It was a procedure, common in parts of Europe but almost unheard of in this country, that called for double-bedding multiple-birth babies, especially preemies.
Kasparian's nurse manager, Susan Fitzback, was away at a conference, and the arrangement was unorthodox. But Kasparian decided to take the risk.
"Let me just try putting Brielle in with her sister to see if that helps," she said to the alarmed parents. "I don't know what else to do."
The Jacksons quickly gave the go-ahead, and Kasparian slipped the squirming baby into the incubator holding the sister she hadn't seen since birth. Then Kasparian and the Jacksons watched.
No sooner had the door of the incubator closed then Brielle snuggled up to Kyrie - and calmed right down. Within minutes Brielle's blood-oxygen readings were the best they had been since she was born. As she dozed, Kyrie wrapped her tiny arm around her smaller sibling.
By coincidence, the conference Fitzback was attending included a presentation on double-bedding. This is something I want to see happen at The Medical Center, she thought. But it might be hard making the change. On her return she was doing rounds when the nurse caring for the twins that morning said, "Sue, take a look in that isolette over there."
"I can't believe this," Fitzback said. "This is so beautiful."
"You mean, we can do it?" asked the nurse.
"Of course we can," Fitzback replied.
Today a handful of institutions around the country are adopting double-bedding, which seems to reduce the number of hospital days. The practice is growing quickly, even though the first scientific studies on it didn't begin until this past January.
But Heidi and Paul Jackson don't need any studies to know that double-bedding helped Brielle. She is thriving. In fact, now that the two girls are home, they still steep together - and still snuggle.

(From, Nancy Sheehan, Readers Digest, May 1996)
Posted by The Rev. Dr. Jennie Clarkson Olbrych at 4:06 PM No comments:

Easter Season is my favorite time of year for humor. Here is a YouTube piece that sums up Church History in a mere two minutes and thirty-three seconds. Enjoy!
Please note: A single click on the play button below will allow you to view the video on this page. A double click will take you to the YouTube website where other works of this comedian are posted. One church member has alerted me to the fact that while this video is "good clean fun", other videos by him which are posted closeby are fairly bawdy. Please be forewarned and look at the video right here with a single click. O the joys of the internet!

Posted by The Rev. Dr. Jennie Clarkson Olbrych at 9:11 AM No comments:

Labels: Easter Season is always a 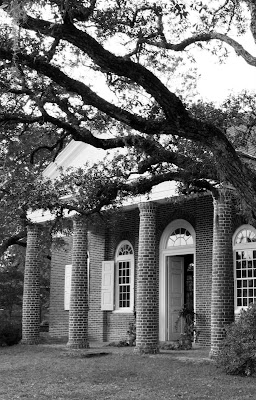 ...and we hope you can join us. It will be a great day. Our bishop, The Rt. Rev. Mark J. Lawrence and Mrs Lawrence (Allison) will be with us. The service will be RT I and Confirmation (go Gabbe!) and Reception.

The service begins at 11:00 am. Bring a covered dish, your most joyful spirits and join us.

The picnic will still be on even if it is raining. In the event of SEVERE weather (tornadoes), the picnic will be moved to the Morrison House (the parish house of the Chapel of Ease - directions to the right).

For directions from Charleston, click on the link to the right.

Posted by The Rev. Dr. Jennie Clarkson Olbrych at 1:48 PM No comments: 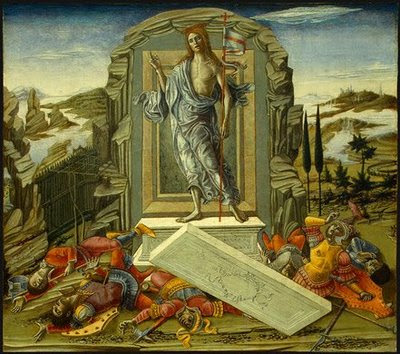 A Most Blessed Easter to you and yours ! May you be deeply enlivened by the Resurrection power of the Risen Christ.

Posted by The Rev. Dr. Jennie Clarkson Olbrych at 2:05 PM No comments: 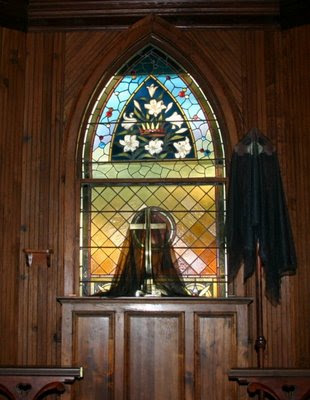 The church is dark now. The altar is stripped and bare. Some are getting up and leaving in silence. Others remain kneeling, looking into the darkness. Holy Saturday is ahead, the most quiet day of the year. The silence of that silent night, holy night, the night when God was born was broken by the sounds of a baby, a mother’s words of comfort and angels in concert. Holy Saturday, by contrast, is the sound of perfect silence. Yesterday’s mockery, the good thief’s prayer, the cry of dereliction—all that is past now. Mary has dried her tears, and the whole creation is still, waiting for what will happen next.Some say that on Holy Saturday Jesus went to hell in triumph, to free the souls long imprisoned there. Others say he descended into a death deeper than death, to embrace in his love even the damned. We do not know. Scripture, tradition and pious writings provide hints and speculations, but about this most silent day it is perhaps best to observe the silence. One day I expect he will tell us all about it. When we are able to understand what we cannot now even understand why we cannot understand.--Richard John Neuhaus (1936-2009)


Posted by The Rev. Dr. Jennie Clarkson Olbrych at 1:22 PM No comments:

Good Friday Around the World 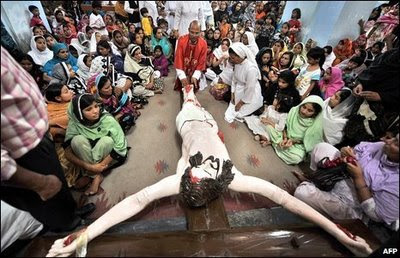 Every year the BBC publishes photographs of Christians around the world marking Good Friday. This one is from Pakistan. Take some time and have a look. The rest can be found in the full article at http://news.bbc.co.uk/2/hi/in_pictures/7994131.stm . More pictures are here http://blog.beliefnet.com/viamedia/2009/04/good-friday-around-the-world.html
Posted by The Rev. Dr. Jennie Clarkson Olbrych at 6:18 PM No comments:

A Poem for Maundy Thursday 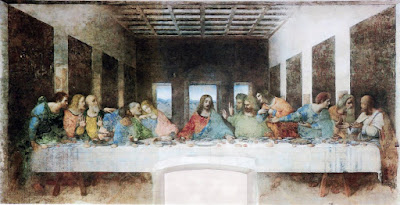 On seeing Leonardi Da Vinci's "Last Supper", Milan, 1904.
Translated by Albert Ernest Fleming
They are assembled, astonished and disturbed
round him, who like a sage resolved his fate,
and now leaves those to whom he most belonged,
leaving and passing by them like a stranger.
The loneliness of old comes over him
which helped mature him for his deepest acts;
now will he once again walk through the olive grove,
and those who love him still will flee before his sight.
To this last supper he has summoned them,
and (like a shot that scatters birds from trees)
their hands draw back from reaching for the loaves
upon his word: they fly across to him;
they flutter, frightened, round the supper table
searching for an escape. But he is present
everywhere like an all-pervading twilight-hour.

Click on the picture to see a larger image.
Posted by The Rev. Dr. Jennie Clarkson Olbrych at 6:20 AM No comments: