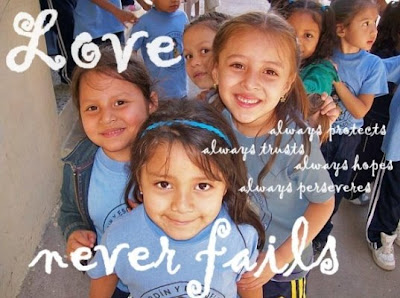 Thank you for all that you do for LAMB. Thank you for your prayers for Betsy, for the children, the construction, the double salaries, the spiritual and emotional wellbeing of our staff (including me!), and our precious country, Honduras. May the Lord continue to speak to us His plans, and may we be found faithful in working towards their completion. 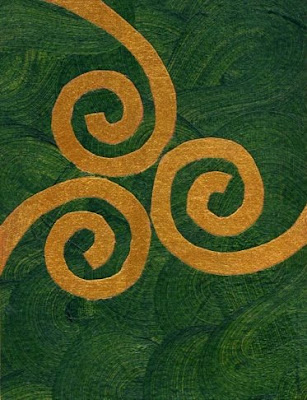 Copyrighted Art by Jan L. Richardson, used with her permission. Check out her web site http://www.janrichardson.com/

How many sermons have you heard about the Trinity ? I suppose that, since I've really been paying attention, for me, the number would be around forty or so. It's one of those topics that we can talk, talk, talk about and never really feel that we have it pinned down. I want to suggest to you that this is a *good* thing. For, how in the world can we wrap our arms around the ultimate mystery? Below follow some clippings on the topic of mystery and the Trinity. Enjoy!
"There ain't no answer. There ain't going to be any answer.
There never has been an answer.
That's the answer."

That's from Gertrude Stein and could apply to many areas of life (despite her choice of grammar!) Here's another one, this time from Robert Capon. Our efforts to describe the Trinity are fruitless, because....

And finally from William Willimon...."Augustine, one of the greatest minds of the Western World, put his head to thinking about the Trinity. Augustine, a master of words, took fifteen books to talk about the Trinity, fifteen books that took him over a decade to write. Augustine’s On The Trinity continues to be helpful in thinking through that which is difficult to think about, and talking about that which is difficult to describe, namely the nature of God who comes to us as Father, Son, and Holy Spirit.

Early on in his massive treatise, Augustine had seven statements about God: The Father is God. The Son is God. The Holy Spirit is God. The Son is not the Father. The Father is not the Holy Spirit. The Holy Spirit is not the Son. And then, after these six statements, Augustine adds one more. There is only one God. This is the thinking that is tough to get into our brains. We have experienced three rather distinctive modes of God’s presence. God is the Father, the Creator of us and the world. God is the Son, the One who comes to us as Jesus, living, suffering, dying, and rising among us.

We experience God as Holy Spirit, that power that has intruded into our world as the near presence and power of God. And yet, we are not trite theists, we don’t believe in three gods. We know, with Israel, that is only one God. These names, Father, Son, and Holy Spirit are not three names for the same thing. They are three names of one God. And how to make sense of that? You can certainly understand our sisters and brothers the Jews who hear talk of this kind and who may think to themselves, “Christians are no longer monotheist. They no longer believe in one God but in three gods.” No, what we are attempting to do in the Trinity is make sense of how there can be one God, and yet that one God being experienced by us in three special ways. In the Council of Nicea, they spoke of God’s “three persons.”

In our language, that sounds like we are talking about three different people. No, Nicea was building upon the Greek experience, from Greek drama of the way in which one character in a Greek play portrayed a number of different people in the play by simply moving off stage, putting on another mask which was called a persona, and returning to the stage as a different actor. One actor could play three different roles. I am one person, but I play the roles of father, husband, and son.

In a similar way, though there is one God, we experience that God working in three different ways in the world. And yet, like most analogies about God, this analogy helped, but not completely. In Book 7 On the Trinity, Augustine tried this. Rather than looking specifically in scripture, or in the world, for analogies to speak about God, he looked within himself. In looking within himself, Augustine noted how the human soul itself is Triadic, Trinitarian.

There is a kind of triune way in which we experience ourselves, as if the Trinity is built right into the structure of our reality. We say for instance “I love myself.” According to Jesus, it is all right to love ourselves, for we are to love our neighbors as we love ourselves. So we can say, “I love myself.” When we do so, we are speaking in a Triune way. When I say “I love myself,” there is a lover that is doing the loving, namely me loving myself. There is also the beloved, the object of my love, which is also me, then, there is the loving, the act and energy of the lover upon the beloved. So even with the one there is the lover, the beloved, and the loving. Thus, within our own hearts, in our own experience, Augustine said that there is the vestigia trinitatis. Reality is Trinitarian.

One of the church fathers said that, “When we talk about the Trinity, we must forget how to count.” He was simply recognizing that, at first glance, the Trinity is a mathematical impossibility. After all, how can one equal three? We must throw away our math, not because the Trinity is a logical muddle, but because we need a different kind of logic.

It took Augustine fifteen books to try to think about it, because God is God and we are not. Because God comes to us with a complexity and effusiveness, a ubiquity and a plenitude that boggles our modest minds, no wonder we have trouble thinking about God. No wonder the Trinity boggles our imaginations. And that is probably the right way to put it. The problem with the Trinity is not that this is a bunch of nonsense, but that God is God, in God’s particularly glorious, effusive way, and we are just people, the recipients of a love so deep we cannot find words to describe it.

When we think about the Trinity, we must forget how to count. Augustine makes another attempt to think in a Trinitarian way by looking at himself. In my soul, there is memory, understanding, and will. That is when I say, “I remember my mother,” there is the will, my decision to remember something, to draw into the present that which is past. And yet simultaneously there is that act of memory. I will to remember something and, with luck, I will to remember. And yet while I am willing, and remembering, I am also understanding. My mother is appearing instantaneously before my eyes, in my memory. I see her, know her, and understand. It is as if the Trinity, God’s dynamic, effusive nature appears to be built right into the structure of who I am and what the world is. There is a modern word for talking about this dynamic structure — synergy. Within the Trinity, there is constant movement, interaction, as the Father gives to the Son, and the Son is constantly returning praise and glory to the Father, and the Father and the Son give to the Holy Spirit, and the Holy Spirit constantly draws everything back to the Father and the Son.

There is the Beloved, the Lover, and the Love."