FollowUp to Situation in Egypt - Miracles Do Happen

The following is an update from the Most Rev. Dr. Mouneer H. Anis, Bishop of the Episcopal/Anglican Diocese of Egypt with North Africa and the Horn of Africa.
13 October 2011

In the tradition of the Coptic Orthodox Church there was a story of a Muslim Caliph who challenged the Coptic Patriarch and said "you have a verse in your Bible that says, 'by faith you can move mountains.'" The Caliph added, "Show me that this verse is true and move the mountain of Mokottam (in the south of Cairo). If you cannot move it, I will kill all the Christians. "
The Patriarch was very sad and worried because he was not quite sure that the mountain would move. He was contacted by a shoe maker named Simon who said to the Patriarch, "do not worry, let us just pray and fast for three days and our mighty Lord will make a miracle!"
The Patriarch called for prayer and fasting for three days. On the third day, the doubting Caliph came to see if the mountain would move or not. The worried Patriarch was praying with his people, and behind them, Simon was interceding with confidence.
The mountain moved! The Caliph said, "I now know that you worship the true God."
Today was the third day of fasting and prayer. Many of our staff in the Diocese of Egypt, having this story in mind, were expecting a miracle to happen today or tomorrow; a miracle that can show how God will rescue His Church!
Today I have seen a miracle. It was very much like moving a mountain. I went this morning to visit the Grand Imam of AI Azhar. I arrived a bit early and I waited at the office of his advisor. While waiting I saw a bearded Muslim man in his 50's who came to present a proposal to the Grand Imam's advisor. He said, "I am a Muslim and I live between Tahrir Square and Maspero. I came here to witness that the spirit of hatred against Christians has increased a lot. On the night of the 9th of October when the killing of Christians took place, I met a group of people who were searching for Christians to beat after they heard that Christians attacked the army."
The man added, "Hatred is on the rise and I came to witness for this." He proposed then that AI Azhar must respond to all the thoughts that promote this hatred towards Christians. He also said that, "I and a group of Muslim writers and artists are happy to devote our time in order to combat this hatred against Christians. We have a list of books we must respond to and correct the false teachings towards Christians."
The advisor of the Grand Imam said to him, "this is a very good idea. Why don't we have the idea written and I will present it to the Grand Imam."
I did not believe my ears! A group of Muslims are disturbed by hatred of Christians and want to combat this hatred! !!!
To me, this was a miracle!
Who moved the heart of these people? Certainly it is God, who hears our prayers!

Let us continue to pray.

The following message from Bishop Mouneer Anis was received in the Diocesan Office on October 9, 2011. Please keep our brothers and sisters in Egypt in your prayers.

Dear Friends,
Greetings in the Name of our Lord Jesus Christ!
I do request your urgent prayers as the situation here in Cairo is very inflamed. Many Christians demonstrated after the incident of the burning of a church building in Mari Nab near Aswan (Egypt). The demonstrations started peacefully as the people were requesting that investigations for the incidents of burning and demolishing churches would be completed and the new law for building churches, that was promised four months ago, would be passed.
This evening it turned to be very violent between demonstrators and the military. More than 20 people were killed and more than 100 were injured.
Tomorrow there will be a large meeting for the House of Bishops of the Coptic Orthodox Church and political leaders will have a separate meeting to discuss a way out of this very difficult situation. I would appreciate your prayers for our beloved country.
We will hold prayer meetings tomorrow and I hope that I can meet with Muslim religious leaders in order to discuss a way forward for the situation.
Thank you for your prayers.
--The Most Rev. Dr. Mouneer Hanna Anis
Bishop of the Episcopal / Anglican Diocese of Egypt with North Africa and the Horn of Africa
President Bishop of the Episcopal / Anglican Province of Jerusalem and the Middle East
Posted by The Rev. Dr. Jennie Clarkson Olbrych at 10:23 AM No comments: 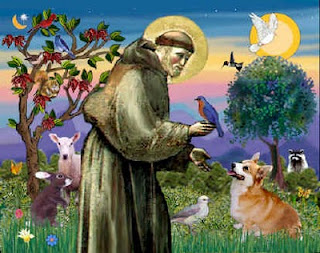 Everyone is cordially invited to St. James-Santee's annual Blessing of the Animals.  It will be held at 4:00 pm, Sunday, Oct. 9 - on the steps of the Chapel of Ease.  Please join us and bring whatever critters you may have.  The Blessing of the Animals is offered in thanksgiving for the life of St. Francis of Assisi.  Here is his Collect (prayer).

Most high, omnipotent, good Lord, grant your people grace to renounce gladly the vanities of this world; that, following the way of blessed Francis, we may for love of you delight in your whole creation with perfectness of joy; through Jesus Christ our Lord, who lives and reigns with you and the Holy Spirit, one God, for ever and ever. Amen.
Posted by The Rev. Dr. Jennie Clarkson Olbrych at 2:49 PM No comments: