“Don’t be afraid,” the angel said – almost always, the first word out of the mouth of the Holy One or his emissaries.

“Fear not” – and yet, how could they not have been scared to death?
Mary Magdalene and the other Mary had gone in the dark to the tomb of Jesus, and, suddenly, there was an earthquake, and an angel coming down from heaven and rolling back the stone. “His appearance,” the text tells us, “was like lightening and his clothing white as snow.”
The guards shook with fear and became like dead men– the words Matthew uses tell us they became rigid, immobilized – passed out cold …as if they were dead…

Think about what happened with the Israelites when God miraculously pried them out of Pharaoh’s hands. They ran through the desert pursued by an army and came to the Red Sea .
There was a wall of water in front of them, a wall of Egyptians behind them and the walls were closing. Would it be death by drowning or death by the sword? V. 10 in that 14th chapt of Exodus tells us, “In great fear, the Israelites cried out to the Lord and said, 'Was it because there were no graves in Egypt that you have taken us away to die out here in the wilderness? What have you done?'" And Moses said, “Do not be afraid, stand firm and see the deliverance the Lord will accomplish for you today,” and God made a way through the waters.

Think of the vision of desolation seen by the prophet Ezekiel who lived at a time when the people of Israel had been defeated in war. Towns and cities had been razed with untold numbers of casualties. The survivors were marched off into slavery – all forms of family and community destroyed. An entire people were disheartened and disappearing, probably so sick at heart, they wanted nothing more than to lie down and die. “Don’t be afraid” God said to them through Ezekiel, “I will give you new life.” And He did.

To the same Ezekiel, God showed the vision of the valley of the Dry Bones—I have wondered if a modern-day equivalent imagery might not be some of the photos coming out of the concentrations camps like Dachau – with death everywhere…no life, no future, no hope. Can these bones live, came the question to Ezekiel…and he responded…o Lord, only you know..and you remember what happened…the Spirit of Life itself breathed over, blew over those bones and the bones were joined together, flesh and muscle,came on them. In the valley of death, the Spirit of Life danced and blew over the dead bones of a whole people, and they lived.

And, St Paul proclaims over and over again that that when we are united to Christ, Death has no hold over us.

Now, back to our gospel reading. The angel of the Lord said to the women , “Do not be afraid. You are looking for Jesus…he is not here…he has been raised from the dead and is on his way ahead of you to Galilee…you will see him there. "
With joy and fear and everything else, they ran to tell the disciples, and suddenly on the road with them was Jesus. What a moment! And, what did he say to them? He said,“Greetings” or the equivalent of “hey, y’all." Then, he said to them, Don’t be afraid…go and tell.

You see, the followers of Jesus have nothing to fear… NOTHING. God’s resurrection power can overcome anything… So, what are you afraid of? Financial loss? disease? Our own death? The death of someone we love? The anguish and heartsickness of grief?

These are very real losses but we need to know that 1. those we love are not lost but in God’s keeping…2. that resurrection is real..perhaps, the most real thing of all. 3. that death can do its worst and does not have the final word…because in the resurrection of Jesus Christ from the dead, God’s final word to us is life, and life energized by a love that will never die.

“Don’t be afraid” is the sermon delivered first by a lightening –faced angel and then by Jesus himself. We are witnesses to the resurrection and there is nothing on this earth that is beyond the reach of God’s resurrection power.

Jesus says to us – go and tell others that I have walked this road before you and there is nothing to fear… go and be witnesses to the resurrection…go be Easter people who live with joy and anticipation in our sad, anxious and fearful world.

JTCO
Posted by The Rev. Dr. Jennie Clarkson Olbrych at 11:49 AM No comments: 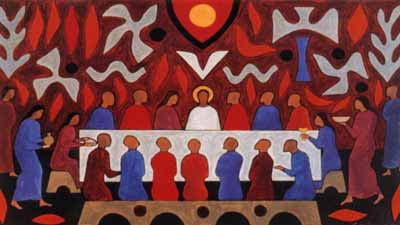 * Please note that in the event of very inclement weather (tornado or hurricane), the picnic will be held at the Morrison House in the Village.
Posted by The Rev. Dr. Jennie Clarkson Olbrych at 1:21 PM No comments:

It is hard to believe that I have now been your vicar for two years. My, how time flies when you’re having a good time! Truly, I am blessed to serve you.

When I first came on board, the vestry expressed a strong desire that SJS continue the work of moving from being a Sunday only chapel to having a fuller ministry presence. To that end, we have been working for some time to identify our vision for ministry.

Vision for ministry, mission, mandate and other like terms are often used to help organizations focus their efforts and resources more effectively.

In the Church, mission is the larger term, and we already know what that is because it was given to us by our Lord. The Mission of the Church is delineated by The Great Commandment on one side (Love God with all your heart, soul and mind and Love your neighbor as yourself – Luke 10.27) and The Great Commission on the other (Go make disciples – baptizing them in the name of the Father, the Son, and the Holy Spirit, and teaching them to observe all that I have commanded. –Matthew 28.19-20). The Vision for Ministry is the unique call or way in which a congregation (or individual) carries this out in a particular season.

Your vestry and I have been working for some time now to articulate the unique call of God for this Church family. My assumption has been that God has already been at work here for quite a long time (!) and that probably what we needed was simply to identify more precisely what is already happening. Consequently, over a period of time, I have sensed and observed that St. James Santee is a place of healing.

As I have talked about this and checked out this perception with many of you, it seems to ring true. As a result, we have been using the following phrase to describe who we are and what we are doing in this season as , “Called to be the Hands of Jesus – Connecting, Caring and Healing.” The helpfulness of this kind of focus is that strategic decision making becomes so much simpler. When we are faced a decision, we ask, “How will this further our call to be a healing community?”

As one could imagine, this is a broad description, and we have lots of ideas about how to live it out. These have included developing a Recovery Ministry as well as a ministry of healing prayer. What is also included is the sense of being called to heal the hurts in the community and the families around us. To this end, we are offering The Marriage Course which is designed to strengthen marriages. This will be offered first to the congregation and then later, after a trial run, to the community,. This is not to say that we are overlooking the needs of single persons, but just that this is a good and obvious starting place.

There's more to add but the conversation will continue. See below for more information about The Marriage Course.

May you all have a blessed Holy Week and a glorious Easter,

The Marriage Course at SJS- Register Now!
Wednesday evenings – April 2-May 14 from 7-9:30 pm.
Cost - $125 per couple (includes dinners and materials – Financial assistance is available)
The Course will be facilitated by Kent MacEachern, LMFT / PartnerCoach. More general information can be found at http://www.themarriagecourseusa.org/
The first course will be limited to six couples. Please sign up by speaking with Mrs. Olbrych – - or at stjamesec@knology.net.

About The Marriage Course.....
The Course is a series of eight sessions designed to help any married couple strengthen their relationship. ….“It’s a great opportunity to spend time together as a couple looking at the important issues in your marriage. The Marriage Course is very practical and will help equip you with the tools needed to build a healthy marriage that lasts a lifetime. Each week you are given the opportunity to enjoy a special meal together and listen to a talk. Then there is plenty of time to discuss the topic as a couple. There is no group work involved at any stage of the course. The Marriage Course is now being run in 60 countries and we hope you will be able to join us.
Posted by The Rev. Dr. Jennie Clarkson Olbrych at 1:37 PM No comments: