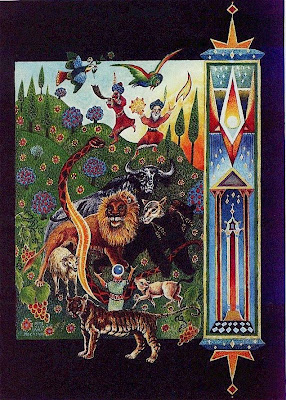 Let us join our voices with those of the angels who brought us the Christmas message of Peace on Earth.
Glory to God in the Highest and, to All on Earth, Peace and Goodwill !
Here is a a portion of a prayer for peace....
"May the Lord banish from the hearts of all men and women whatever might endanger peace.
May He transform them into witnesses of truth, justice and love.
May He enkindle the rulers of peoples so that in addition to their solicitude for the proper welfare of their citizens, they may guarantee and defend the great gift of peace.
May He enkindle the wills of all so that they may overcome the barriers that divide, cherish the bonds of mutual charity, understand others, and pardon those who have done them wrong.
May all peoples of the earth become as brothers and sisters, and may the most longed-for peace blossom forth and reign always among men and women."

A Holy and Blessed Christmas to all you...

One of my most favorite Christmas carols is the plaintive "I Wonder as I Wander." Its origins lie in a song fragment collected in Murphy, NC in 1933 by folklorist and singer, John Jacob Nies. Here is a beautiful performance. More information, including the lyrics, is below. One can surely hear the Appalachian Scots influence. I especially like the characterization of humankind as "poor or'ny people like you and I..."

While in the town of Murphy in Appalachian North Carolina, July 16, 1933, Niles attended a fundraising meeting held by evangelicals who had been ordered out of town by the police. In his unpublished autobiography, he wrote of hearing the song:
A girl had stepped out to the edge of the little platform attached to the automobile. She began to sing. Her clothes were unbelievable dirty and ragged, and she, too, was unwashed. Her ash-blond hair hung down in long skeins.... But, best of all, she was beautiful, and in her untutored way, she could sing. She smiled as she sang, smiled rather sadly, and sang only a single line of a song.
The girl, named Annie Morgan, repeated the fragment seven times in exchange for a quarter per performance, and Niles left with "three lines of verse, a garbled fragment of melodic material—and a magnificent idea". (In various accounts of this story, Niles hears between one and three lines of the song. Based on this fragment, Niles composed the version of "I Wonder as I Wander" that is known today, extending the melody to four lines and the lyrics to three stanzas. His composition was completed on October 4, 1933. Niles first performed the song on December 19, 1933 at the John C. Campbell Folk School in Brasstown, North Carolina. It was originally published in Songs of the Hill Folk in 1934.

2. When Mary birthed Jesus 'twas in a cow's stall,
With wise men and farmers and shepherds and all.
But high from God's heaven a star's light did fall,
And the promise of ages it then did recall.

3. If Jesus had wanted for any wee thing,
A star in the sky, or a bird on the wing,
Or all of God's angels in heav'n for to sing,
He surely could have it, 'cause he was the King.
Posted by The Rev. Dr. Jennie Clarkson Olbrych at 2:43 PM No comments: